At the outset, let me share 2 observations from the twitter with regards to the slanderous campaign against RSS chief Mohan Bhagwat.

Now read this hidden and buried resolution “Need to maintain the dignity of Women” passed by RSS in 2008 by its apex body ABPS (Akhil Bharatiya Pratinidhi Sabha), that the Main Stream Media (MSM) would not want or care to publish:

(Full text of the resolution can be found here)The ABPS sees it as regretful that women are being increasingly subjected to indecent behavior, eve-teasing, sexual exploitation, abuse and other despicable crimes. It is deeply distressing that in addition to female foeticide, dowry violence etc. they are subjected to sexual abuse at work places, public places and even homes too.

The ABPS profoundly feels the need for a radical transformation in the mindset of society to bring in a meaningful change in this de-culturising situation. Just to rely upon the laws promulgated by the Government will be self-deceptive. The society must honestly realize that it is created by the institution of family and woman is the pivot of the family; hence a developed society cannot be envisaged without an enlightened, awakened and empowered woman. It is a pressing necessity that families, education system, media and society must change their attitude to ensure a respectful behavior towards woman. The ABPS appeals to the saints and social leaders also to take a leading role in this respect.

First on Jan 3rd, the MSM twisted the recent speech of Sri Mohan Bhagwat in Silichar where he was responding to a query on the rise of rapes and atrocities against women in India. The YouTube video (7:45 min) conveys the message that Sri Mohan Bhagwat was clearly implying Bharat as values and expressed concern that we as a nation have forgotten human values. Unfortunately it was easy to extract and misinterpret the India vs. Bharat quote by the rabid media people possessed with scavenging instinct. There was a verbal assault on RSS chief and the key point made by Sri Mohan Bhagwat “Besides new legislations Indian ethos and attitude towards women should be revisited” got lost in the shrill accusations. Interestingly, the social media (Twitter, YouTube, and Facebook) came to the rescue and facilitated the truth. Kiran Bedi viewed the original video and tweeted in support of Sri Mohan Bhagwat’s views and commented on the media to rectify its views. 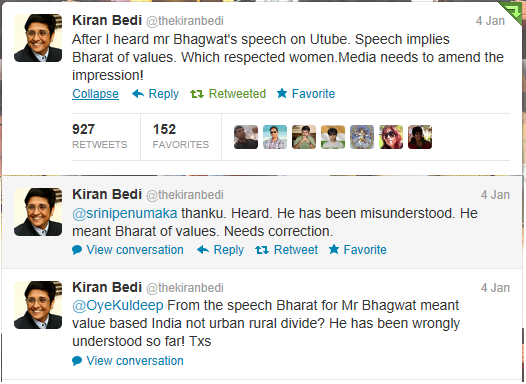 On January 6th 2013 the venal media was at it again. It unleashed a viral false-propaganda based on a doctored video recording from the “so called” credible news supplier source ANI (Asia News International). In its typical style NDTV picked this up and further twisted the news saying that ‘Women meant to do household chores’: another shocker from RSS chief. The English media attacked RSS chief quoting him in total falsehood that women are bound to look after their husbands by contract, and if they didn’t fulfill their duties, their husbands should leave them. Anti-Hindu, Limo-liberals became ecstatic and were all over the TV shows. They all did a great disservice to the nation by shoving the falsehood and pure lie into the minds of the millions.

See the confession by the ANI News Editor on twitter to the comment by the columnist Kanchan Gupta.

If it were the good old pre-internet days like in 90s, the well-wishers and supports of RSS including a good number in RSS would have lost this psychological war of minds and perceptions.  Fortunately we are in 2013; the leftist-socialistic-hegemony, control and gate-keeping of news by few dark-souls are no more the case. Social media has spread wide into the landscape of India (rural and urban) empowering millions of ordinary people including patriots, nationalists, activists and RSS Swayamsevaks. The consumer of news has now become the producer of news and digital content. An avalanche of outrage on twitter and elsewhere on the internet built up pretty fast, thanks to the relentless effort and campaign by patriots across the middle India on Social Media.(You can read a few here Samavada, Newslaundry and Rediscovery of India). This made the main stream media to stop its slanderous tirade and were forced to bend. The media was literally caught with its hands in the cookie-jar. Its addicted habit of spit and run did not work this time. Shameless deception got fully exposed and they were forced to lick their wounds.

I would give the benefit of doubt to all those misinformed and ill-informed about RSS and its outlook towards women. Hope one would rectify their skewed perception; and the ignorance and prejudice demonstrated by equating Sri Mohan Bhagwat to Jamaat-e-Islami would go away.

It is up to the well-meaning people including those who need not necessarily subscribe to the views of RSS, to see through the smoke screens, facades and pursue the truth. Who a misogynist is, who is a in misandry and who is deceptive, I shall leave it to the reader’s judgment.