“Invasion by foreign religion and foreign culture will pose danger to Naga Identity. Beware of this danger ” – Rani Gaidinliu

The person who guides the society not by words but by deeds putting his own life as an example is a leader in true sense. The year 2014-15 is the birth centenary year of one such great leader, the legendary Naga lady, Padma Bhushan Rani Gaidinliu. This article by  Tasile N. Zeliang on the life and thoughts of Rani Ma will truly inspire us. 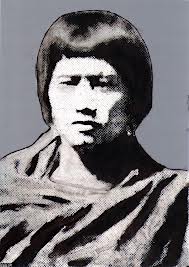 Rani Gaidinliu, popularly know as Rani Ma, is a highly revered Naga lady for her selfless services to Naga society and fight for freedom of the country. She was a committed lady for the preservation, protection and promotion of her forefather’s religion, eternal culture, customary laws and traditional village institutions. She organised Naga army and challenged British empire. British Government declared her as terror of north east and had awarded life imprisonment to her. When Pt. Nehru approached the British government to free her, they refused to oblige on the plea that if Rani Gaidinliu was freed, the revolt against British empire would spread like wildfire. She came out of Shillong prison when the country got Independence on August 15, 1947. But the travesty is that she was not allowed to visit her people for whose freedom, religion and culture she sacrificed her prime of youth. Same reason was given that if she was allowed to return to her Heraka people, the movement for preservation, protection and promotion of her forefather’s religion and eternal culture would catch-up momentum.

Influence of Church on some Nagas leading to separatism :

A section of our own Naga society who was under deep influence of church, was opposed to Heraka movement and Rani Gaidinliu. Rani Ma was kept in Yimrup village of Tuensang district nearly 300 km away from her people. See the fate that our own Zeliangrong persons who had been converted to Christianity spied against her and helped British army to arrest her from Poilwa village near Khonoma. They hatched a plan to kill her. Several of her Naga army sepoy were killed in the fierce battle. What was the guilt of Rani Ma ? The only  crime Rani Ma did was that she pioneered her forefather’s religion, eternal culture, customary laws and traditional village institutions. She advocated in no uncertain terms that the fate of Nagas was with India. She demanded the integration of all Zeliangrong areas in one administrative unit on the plea that this integration would accelerate the economic development of Zeliangrong people and fulfil their political aspiration.

The files in Union Home Ministry started moving in favour of integration of whole Zeliangrong areas with Nagaland. Rani Ma, Pau N.C. Zeliang and Prof. Gangmumei Kamei of Imphal were toiling hard to ensure that aspiration of Zeliangrong Nagas for integration was fulfilled. But this success was turned into failure by our own people on the plea that neither Rani Ma nor Pau N.C. Zeliang nor Prof. Gongmumei Kamei was Christian and the credit of achieving this integration should not and must not go to any person other than a Christian. And it should never, never go to a person like Rani Gaidinliu.

Loss of Culture Is Loss of Identity :

She clearly and fearlessly preached among her people that a society whose forefather’s religion, culture, tradition, village institution and customary laws are destroyed, becomes weak and vigourless. In due course of time indiscipline and chaotic situation prevailed in that society. Rani Ma and Pau N.C. Zeliang reverberated this doctrine repeatedly. Unfortunately, Naga leaders- political, social or of church, preferred to ignore.

The visit of Rani Ma in any Naga area used to spread like wildfire and people. Christians and Hindus (non-Christians) both used to come out on the road to have a darshan of her. She would stop at gathering at prominent places, meet the people, exchange the good-wishes and then advance on journey. The Hindu society worshipped her like a Goddess. She toured the country extensively.

She met the second RSS Sarsanghachalak MS Golwalkar (Guruji) in early seventies at Guwahati, attended the Second World Hindu Conference 1979 at Prayagraj (Allahabad) at Sangam (convergence) during one and quarter month long Maagh Mela. She graced the World Women Conference as its President where the lady dignitaries from all over the country and abroad had assembled. Since then, she had close association with a number of dignitaries and organisations throughout the country. She became a bridge between Naga society and larger Hindu Samaj. 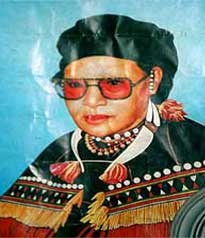 For the selfless service to the society and the country she was conferred a number of awards.

In addition to this, Rani Gaindinliu Stree Shakti Purashkar was started by the Government of India in her memory which is given on March 8 of each year to veteran women social workers in recognition to the selfless sacrifice for the society. A postal stamp has also been released in her memory.

Christian Missionary Image of the Nagas in Current Times :

The Naga society has been led on wrong path. As a result, we are killing each other. This killing is justified in the name of Nagaland for Christ. I, once, read an article written by an ISKCON sanyasin of American origin. The title of the article was “How I was saved from being saved” . The author, herself had narrated in that article how she protected herself from being converted to Christianity by saviours of the soul. I pray Lord Tingwang, O Lord Tingwang! Please save our Nagaland from (the so-called) saviours of Nagaland.

The volcanic situation created by our own Christian brothers in the early sixties against the Nagas religion and culture in Zeliangrong areas compelled Rani Gaidinliu to hold gun again in her hands and adopt the jungle path to protect her people from forcible conversion at gun point. The second resumption of guerrilla warfare was not directly against foreign forces but against those who were destroying the Naga traditions and values and also against those who were preventing the Naga youths from following the values set-forth by our forefathers and who were breaking the traditional control of village elders over village community particularly youths.

In America, Britain and other Christian countries, Nagas were described as wild, savage, naked, head-hunters and with no religion. I have visited several mega cities in the country and have lived with several Hindu families. When Hindu hosts came to know that I was a Naga girl, they whispered. They could not believe that a Naga person could be so refined in all respects. It was not the mistake of the Hindu hosts. It was the mistake of our own since we allowed foreign Christian missionaries to propagate that we Nagas were wild, savage, heathen, naked, head-hunters and raw-meat eaters. This propaganda is still made in foreign countries.

Rani Gaidinliu and later, Pau N.C.Zeliang had opposed this malicious propaganda against the Naga society. Rani Ma had toured the country, established close contacts with the Hindu organisations and cleared the cloud of misconception against the Nagas from the mind of the Hindus. Later Pau N.C. Zeliang and now Shri Ramkui Wangbe Newme, President of Zeliangrong Haraka Association, have been telling us that any Naga who is neither Christian nor Muslim, falls under the category of Hindu religion.

Due to their untiring efforts, the image of Naga society has improved and brightened in the country.

Article first published in Organiser in 2007.

1 thought on “Rani Gaidinliu – Tribute to a Patriot”