Elections Ahoy ! and ofcourse India has to be portrayed intolerant, fascist;  Otherwise how does one create the fear that “Minorities Khatre Mein Hai” and keep reaping the benefits of it ? And this time all the stakeholders gang up together. It is therefore imperative that people who believe in India’s present and future raise their voice.

“ Are We Living in a Frightening Period ? “ – Anupam Kher Video

And while on the subject, would be good to see how some of the the #Awardreturnees pay tribute to their masters. 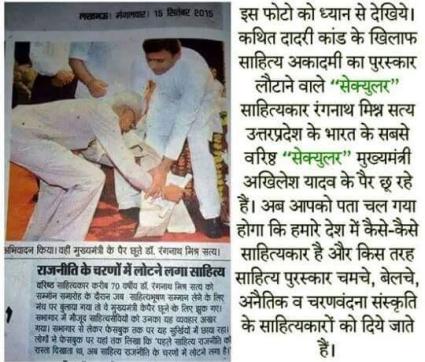 It is clear that most of those who took the awardwapsi were motivated politically. A few gullible people also followed either due to ideological affinity to the opposition Or out of trying to make a point owing to the media blitzkrieg about intolerance.

Those have material on the above subject, kindly mail us at arisebharat@gmail.com

Error: Twitter did not respond. Please wait a few minutes and refresh this page.