This anecdote is from Verghese Kurien’s memoirs ” I Too Had a Dream” . 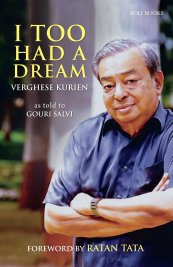 Maniben Patel, Sardar Patel’s daughter, was a woman of tremendous honesty and loyalty. She told me that when Sardar Patel passed way, she picked up a book and a bag that belonged to him and went to meet Jawaharlal Nehru in Delhi.She handed them to Nehru, telling him that her father had instructed her that when she died she should give these items to Nehru and no one else. The bag contained Rs 35 Lakh that belonged to the Congress Party and the book was the party’s book of accounts. Nehru took them and thanked her. Maniben waited expectantly, hoping he would say something more,but he did not, so she got up and left.

I asked her what she had expected Nehru to say to her. ‘I thought he might ask me how I would manage now, or atleast ask if there was anything he could do to help me. But he never asked.’ she explained. She was extremely disheartened and in a way the incident revealed the strain in the Nehru- Sardar Patel relationship.  It was quite distressing to see that neither Nehru nor any of the other national leaders of the Congress ever bothered to find out what happened to Maniben after her father died.”

“After all the sacrifices that Sardar Patel made for the nation, it was very sad that the nation did nothing for his daughter.In her later years,when her eyesight weakened,she would walk unaided down the streets of Ahmedabad, often stumble and fall until some passerby helped her up.When she was dying, the Chief Minister of Gujarat, Chimanbhai Patel ,came to her bedside with a photographer. He stood behind her bed and instructed him to take a picture.The photograph was published in  all the newspapers the next day. With a little effort, they could so easily have made her last years  comfortable”

Ed Note : Compare the above with the efforts that Nehru took for his daughter Indira.