Some people name Article 370 as the root cause of controversies over J&K being equal to all other states of India like Bihar, Panjab, etc ; Many believe that now Article 370 does not have much importance since it is through this article many provisions of Indian Constitution, many laws/ Acts of Indian Parliament been extended to J&K. Many have become part of J&K Constitution or some restrictive provisions of J&K Constitution are now very much in conformity with Constitution of India, so debates on Article 370 should now come to end. Rather the people who made such provisions and made some controversial commitments in 1947 to 1950s should have been questioned or their “heirs” need be asked to accept the responsibility.

It will not be fair to simply question and reject those people for whom such provisions have been laid and if these beneficiaries still want to hold fast to the 1Article 370; they can not be forced to shed their “special” rights, rather they shall have to be socio-politically convinced for coming out of the mindset of “special” provisions . They will have to be convincingly told about the negative aspects, if any, of such provisions in case it has to remove democratically.

Unfortunately today, it is a bitter reality that Article 370 has proved a breeding ground for those who are against J&K as an integral part of India, or who raise questions on Constitutional Status of J&K. It poses also a threat to peace in J&K with the passage of time. The number of those questioning Indian intentions has grown. Rather it appears that Delhi has not taken the issues that seriously over the last 65 Yrs, not even after 1990. 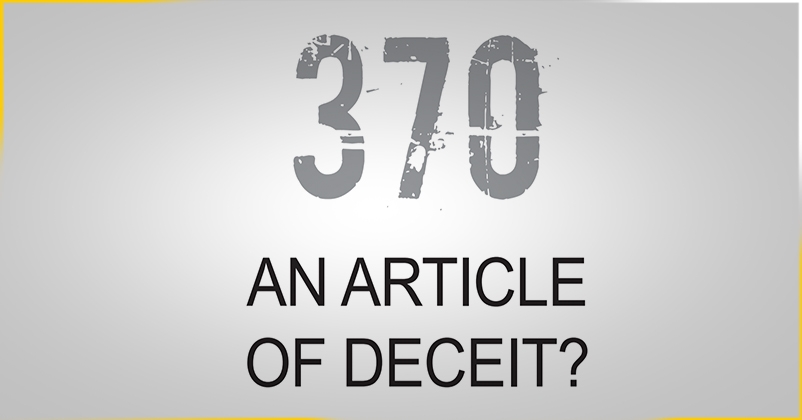 Even some political leaders that do hold fast to 1947 Accession of J&K with India no doubt but still believes that J&K should retain her “own Constitution” and “own Flag” accuse India of unduly extending some provisions of the Indian Constitution to J&K and demand that laws that have been extended to J&K before 1957 or thereafter must be reversed. Many amongst them have remained part of governments in J&K and they and their parties have consented constitutionally according to provisions of Art 370 in and outside J&K legislature for extension or adoption of the Articles or Acts or Provisions that are now being dragged into controversies. It can not be overlooked that the way some of these people have been accusing India of eroding the autonomy of J&K as well as breaching upon the trust that the “Kashmiri” had rested on India has gone to the advantage of those who question the truth of the October 1947 Accession of J&K with India. So, Due to this separatists are so encouraged that when invited by Delhi, they plainly challenge the 1947 accession and they reject the offer. Had it not been so separatists would not have been so particularly drawing the first attentions of Delhi, so plainly challenging the 1947 accession and rejecting the offers for talks from the Governments; expressing so boldly and freely anti-India views in Seminars, rallies and press conferences even outside Kashmir Valley.
Article 370- “Temporary “not “ Special”
The *Article 370 of the Indian Constitution is not a special status provision as regards J&K, but it is a temporary provision with respect to the State of Jammu and Kashmir. This Article is temporary and has to go. The word temporary very lucidly conveys that those who drafted and accepted the Constitution of India made this provision hoping that the state of uncertainty and negotiations would end soon. Such message also flows from Article 370 (3) where it is said that ::Notwithstanding anything in the foregoing provisions of this Article, the President may, by public notification, declare that this Article shall cease to be operative or shall be operative only with such exceptions and modifications and from such date as he may specify: Provided that the recommendation of the Constituent Assembly of the State referred to in clause (2) shall be necessary before the President issues such a notification :

Since no constituent assembly has to stay permanently and hence using the term Constituent Assembly here indicates that Article 370 had to stay in its first form for a shorter period. Some people do argue that Article 370 can not be abrogated since now there is no Constituent Assembly. For argument sake, even this logic can be brushed aside since the J&K Constituent Assembly was also named as the Legislative Assembly under the Constitution of J&K 1996 amended in 2008 Samvat (discussed in detail in earlier chapters). So, the Legislative Assembly can perform the function in case of need arises. Article 368 of Indian Constitution talks of the procedures for amending the Constitution, maybe it could be of some help.

In the earlier times, the people of other Indian states too did not that seriously care for J&K affairs, now with the passage of time, it may not be that easy to clear doubts in the minds of common man, particularly in Kashmir valley, simply by addressing only to the technicalities.

The facts and truth about the intentions of Delhi shall have to be carried to the common man to clear the confusions created that the separatists over the years; even to undo the concepts that have been cultivated by some “ mainstream” Indian leaders who believe that J&K is different than the other Indian States.

In the same way, the Constitution (Application to Jammu and Kashmir) Presidential order of 14th May 1954 too could be seen as a foundation for J&K Constitution. So someone could say that why should any Indian who is the Permanent Resident of J&K forego any special rights that the Indian Constitution extends to him? In case the people who are not for retention of Article 1370 or J&K holding separate Constitution attend to these aspects seriously, They may not be they succeed in motivating those Indians in J&K who are not ready to shed their “special” provision. There have been surely one disadvantage of Article 370 and that is, that some people have been using Article 370 as a symbol of separatism for wooing the innocent people away from the Bharat. Otherwise, also it would be in the overall interest of those who want to check those who have been and are promoting the separatist’s ideologies in the name of separate Flag and Constitution

Text of Articles of Indian Constitution under reference :

Part XXI of Constitution of India: Temporary provisions with respect to the State of Jammu and Kashmir.

(1) Notwithstanding anything in this Constitution,—

(a) the provisions of Article 238 shall not apply in relation to the State of Jammu and Kashmir;

(c) the provisions of Article 1 and of this Article shall apply in relation to that State;

(d) such of the other provisions of this Constitution shall apply in relation to that State subject to such exceptions and modifications as the President may by order specify: Provided that no such order which relates to the matters specified in the Instrument of Accession of the State referred to in paragraph (i) of sub-clause (b) shall be issued except in consultation with the Government of the State: Provided further that no such order which relates to matters other than those referred to in the last preceding proviso shall be issued except with the concurrence of that Government.

(2) If the concurrence of the Government of the State referred to in paragraph (ii) of sub-clause (b) of clause (1) in the second proviso to sub-clause (d) of that clause be given before the Constituent Assembly for the purpose of framing the Constitution of the State is convened, it shall be placed before such Assembly for such decision as it may take thereon.
(3) Notwithstanding anything in the foregoing provisions of this Article, the President may, by public notification, declare that this Article shall cease to be operative or shall be operative only with such exceptions and modifications and from such date as he may specify: Provided that the recommendation of the Constituent Assembly of the State referred to in clause (2) shall be necessary before the President issues such a notification.

AMENDMENT OF THE CONSTITUTION (Article 368)

Power of Parliament to amend the Constitution and procedure therefor.
(1) Notwithstanding anything in this Constitution, Parliament may in the exercise of its constituent power amend by way of addition, variation or repeal any provision of this Constitution in accordance with the procedure laid down in this article.
[(2)] An amendment of this Constitution may be initiated only by the introduction of a Bill for the purpose in either House of Parliament, and when the Bill is passed in each House by a majority of the total membership of that House and by a majority of not less than two-thirds of the members of that House present and voting, it shall be presented to the President who shall give his assent to the Bill and thereupon] the Constitution shall stand amended in accordance with the terms of the Bill: Provided that if such amendment seeks to make any change in— (a) Article 54, Article 55, Article 73, Article 162 or Article 241, or (b) Chapter IV of Part V, Chapter V of Part VI, or Chapter I of Part XI, or (c) any of the Lists in the Seventh Schedule, or (d) the representation of States in Parliament, or (e) the provisions of this Article, the amendment shall also require to be ratified by the Legislatures of not less than one-half of the States 5*** by resolutions to that effect passed by those Legislatures ]before the Bill making provision for such amendment is presented to the President for assent.
(3) Nothing in Article 13 shall apply to any amendment made under this Article.
(4) No amendment of this Constitution (including the provisions of Part III) made or purporting to have been made under this Article [whether before or after the commencement of section 55 of the Constitution (Forty second Amendment) Act, 1976] shall be called in question in any court on any ground.
(5) For the removal of doubts, it is hereby declared that there shall be no limitation whatever on the constituent power of Parliament to amend by way of addition, variation or repeal the provisions of this Constitution under this Article.
Source : JKN Now