The greatness of Shivaji can be assessed by his impact on future generations right from Peshwas who fought the Mughals, to the freedom fighters who fought the British and even today an inspiration to the people who work to protect the Hindu culture from the assaults on it. Not only in Bharat, Shivaji has remained a source of inspiration to the Vietnamese who were attacked by America in the 70′s . The Vietnamese resisted with a guerrilla war and ultimately forced the withdrawal of the American forces.

The great poet Bhushan said, Kashiji Ki Kala Jaati, Mathura Masjid Hoti, Agar Sivaji na hote to, Sunnat Hoti Sabki. If Shivaji was not alive, no Hindu would have existed and everyone would have been forcibly circumcised ( meaning converted to Islam). The famous historian, Jadunath Sarkar thus described Sivaji’s work and his impact. Jehangir had cut the famous undestroyable banyan tree at Prayag and poured boiling lead on it roots with the intention to completely destroy it. He declared that I have destroyed the tree. However, within one year, the tree once again started growing. Shivaji’s life was an example of the capability of the great Hindu culture to break through the tyranny of the continuous attacks on itself. He once again rejuvenated the Hindu race to believe in itself. Read More 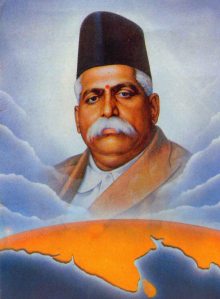 21st June is the Punya thithi of Dr. Hedgewar. On this day in 1940, a group of children were weeping uncontrollably in a room. Suddenly, one boy got up and said, this is not what Dr.ji would have expected us to do. Our true homage to him would be to increase the Sangha karya. For a bala swayamsevak to say these words in his absence speaks volumes of his touch.

A few days before he died, he asked Maa.Yadavraoji. How should the funeral of the Sarsanghachalak take place. Yadavraoji was shocked by the question. Dr.Hedgear then said, “It should not be military style. We are a family organisation and the funeral should take place the same way the head of a family’s funeral takes place.” Such was the care that Dr.Ji took about very small things so that the Reeti – Neeti of the organisation flowered in true Hindu spirit.

It is not easy for a person to put the cause before himself. The greatness of Dr.Hedgewar is that not many know him, but know the organisation that he created; He was instrumental in infusing courage and confidence in a sleeping nation. Read More

“In the name of God, I take this sacred oath that to liberate India and the three hundred eighty million of my countrymen. I, Subhash Chandra Bose, will continue the sacred war of freedom till the last breath of my life. I shall remain always a servant of India, and to look after the welfare of three hundred eighty million of Indian brothers and sisters shall be for me my highest duty. Even after winning freedom, I will always be prepared to shed even the last drop of my blood for the preservation of India’s freedom.”

To read more on the Visionary who dared to lead differently, Click Here

In every age the nation that had access to superior force defeated the nations that did not have that advantage. Savarkar was the only leader in India who openly said that India should have accession to a superior device, weapon or force. Savarkar held that justice would go down if not backed by a superior force. A nation, however tolerant, just and cooperative would go down if it did not go match (approximate) the power of surrounding nations (Lesson taught to India by China war the hard way). India should believe in noble principles for the progress of humanity but keep her superior weapon ready for her own survival. This was the message of Savarkar to India.

Savarkar on revolution (Nov.1909) – “Whenever the natural process of national and political evolution is violently suppressed by the forces of wrong, then revolution must step in as a natural reaction and therfore ought to be welcomed as the only effective instrument to reenthrone Truth and Right. You (the British) rule by bayonets and under these circumstances it is a mockery to talk of constitutional agitation when no constitution exists at all. But it would be worse than a mockery, even a crime when there is a constitution that allows the fullest and freeest developement of a nation. Only because you (British) deny us a gun, we pick up a pistol. Only because you deny us light, we gather in darkness to compass means to knock out the fetters that hold out Mother down.” Read More

” If I have understood the history of my country aright, a pacifism that refuses to take up arms against injustice and makes one a passive spectator of oppression and aggression, does not represent the real teaching of India.Â  Let us not forget that valour was greatly esteemed by the sages and free rulers of India in olden times. When valour languished, the entire polity weakened. When the sword and the book of knowledge kept together, justice, equity and liberty ruled the affairs of the state. We want to see the reappearance of the ancient spirit of valour tempered with a spiritual wisdom consistent with our genius and present needs, which alone can recover civilization out of the chaotic condition of the modern age.”

Syama Prasad Mookerjee [July 6, 1901 – June 23, 1953) was one of the foremost nationalist political leaders of Independent India, and the founder ofÂ the Bharatiya Jana Sangh. An acadecian par excellence and a fearless political leader. His immense contribution to the rehabilitation of the Hindus of East Bengal has to be told and re-told. But for his sacrifice, Kashmir would have been carved out into another nation by the fundamentalist designs of Dr.Sheikh Abdullah and the naiveity and arrogance of Pt.Nehru. Dr.Mookherjee’s famous campaign to integrate Kashmir into Bharat is a saga of valour and sacrifice.is a saga of valour and sacrifice. His slogan which charged the country was “Ek Desh Me Do Vidhan/Ek Desh Men Do Nishan/Ek Desh Men Do Pradhan/Nahin Chalenge, Nahin Chalenge– (Two Constitutions, two Flags and two heads of states in one country, won’t be tolerated)…He remains an inspiration to lacs of Indians.

An excerpt of his speech in 1940 at BHU ” We live in an age when the need of ‘parakrama’, ceaseless exertion, courage and valour, in all spheres of activity affecting the public weal, is more imperative than ever. The menace of invasion from without is within the bounds of possibility. Disruptive forces are at work within the country itself. A nation can only save itself by its own energy. But energy and strength hardly come to a people that does not enjoy the blessings of unity and freedom. Unity need not imply uniformity is not to be encouraged. India is traditionally a land of village republics, and local autonomy has had many noble champions whose patriotism and public spirit are beyond question. But accentuation of differences can not make for strength. A divided India was always a prey to the foreign invader from the days of Alexander and Mahmud of Ghazni to those of Vasco da Gama, Dupleix and Clive. There is much disharmony and disunity in India today. Communal differences have taken such an acute turn that fanatic claims for the vivisection of our Motherland are widely asserted, backed by tacit encouragement of the powers that rule the destinies of India today. Read More

Engineers Day is celebrated in Bharat to commemorate the birthday of Bharat Ratna Sir Mokshagundam Visvesvarayya. A Modern Day Rishi, he was born on September 15, 1860 in Muddenahalli village in the Kolar district of the erstwhile princely state of Mysore. His father Srinivasa Sastry was a Sanskrit scholar and Ayurvedic practitioner. His mother Venkachamma was a religious lady. He lost his father when he was only 15 years old.

Like many of our Rishis of yore, he was combination of philosophy, scientific temperament and high values. Read More

Dharampal’s work is quite extensively known,  not just among intellectuals and university professors, but also among religious leaders including swamis and Jain monks, politicians and activists.

The general effect of Dharampal’s work among the public at large has been intensely liberating. However, conventional Indian historians, particularly the class that has passed out of Oxbridge, have seen his work as a clear threat to doctrines blindly and mechanically propagated and taught by them for decades. Dharampal never trained to be a historian. If he had, he would have, like them, missed the wood for the trees. Despite having worked in the area now for more than four decades, he remains the quintessential layman, always tentative about his findings, rarely writing with any flourish. Certainly, he does not manifest the kind of certainty that is readily available to individuals who have drunk unquestioningly at the feet of English historians, gulping down not only their ‘facts’ but their assumptions as well. But to him goes the formidable achievement of asking well entrenched historians probing questions they are hard put to answer, like how come they arrived so readily, with so little evidence, at the conclusion that Indians were technologically primitive or, more generally, how were they unable to discover the historical documents that he, without similar training, had stumbled on so easily.

Dharampal’s unmaking of the English-generated history of Indian society has in fact created a serious enough gap today in the discipline. The legitimacy of English or colonial dominated perceptions and biases about Indian society has been grievously undermined, but the academic tradition has been unable to take up the challenge of generating an organized indigenous view to take its place. The materials for a far more authentic history of science and technology in India are indeed now available as a result of his pioneering work, but the competent scholar who can handle it all in one neat canvas has yet to arrive. Click to Read More About His Life and Work 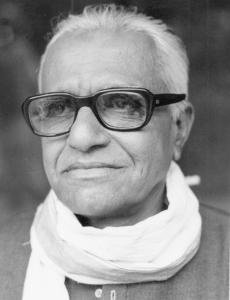 The man who built many men with capital ‘M

A tribute to him was written by S.Gurumurthyji in the Daily Pioneer is below :