Apparently to insult their Principal, a group of Left-leaning SFI students of the prestigious 127-year-old Government Victoria College in Palakkad allegedly prepared a symbolic ‘grave’ for her as a ‘retirement gift’.

Following a complaint by the Principal, Dr T N Sarasu, who retired on March 31, police have registered cases under various sections of IPC against some SFI students.

Sarasu alleged that the students had acted on the behest of “some members” of All Kerala Government College Teachers Union, owing allegiance to the Left.

In her complaint to police, Sarasu has named at least eight SFI students who had prepared the ‘symbolic grave’ inside the college campus and had strewn it with flowers and placed a wreath at about 7 am on March 31.

CPI(M) leader Mr. M.A.Baby gave support to students and he termed it as “Art Installation”

Vimala (46), wife of Kanjokode BJP leader Kannan, had been admitted to the Thrissur Jubilee Mission Medical College on Wednesday, and was in a critical condition with 70 per cent burn injuries. She succumbed on Monday morning.

The incident took place December 28, 2016 in Kanjikode, Palakkad, when Marxist goons torched the home of Kannan, former Panchayat member. With the house being set on flames, the gas cylinder in the kitchen caught fire as well, resulting in an explosion. Soon fire spread to all the rooms, resulting in Kannan’s wife Vimala being grievously injured. She has been admitted to hospital with over 80% burns. Vimala, Kannan and were severely injured. Radhakrishnan, who had suffered 60% burns, died on January 6, 2017

Three local CPI (M) workers were arrested in connection with the case, and the police said that more suspects are yet to be arrested in the case.

Koilandi: In a recent shocker,DYFI goons unleashed unbridled terror on the Art of Living camp organized at Moodadi Gokhale UP School, Koilandi. The Youth Leadership Training Programme, aimed mainly at empowering youth, witnessed mayhem in the early hours of 1 January 2017. Many, including a Dalit girl were humiliated and injured. In spite of nine persons being critically injured, police are alleged to have made all efforts to stifle the matter.

According to sources, the mobile phones and gold ornaments of those who participated were stolen. Equipment, including loud speakers were fully destroyed. “In spite of the camp being wrecked and people being injured, police remain callous to the entire incident. In fact they have claimed that a complaint has not been registered. In fact eminent persons related to government machinery, including the MLA have sought settlement of the matter, with an offer of compensation,” said sources under condition of anonymity.

The camp which began on 24 December 2016 was attended by people from all over the country. As many as nine people were injured in the attack that was unleashed. They have been admitted to the government hospital. Six out of the nine people have been grievously injured. The camp was to conclude on 1 January 2017, when the attack was launched in the early morning hours during a meditation session, by DYFI goons.

A group of activists of the Students Federation of India (SFI) at Maharaja’s College, Kochi

KOCHI: A group of  students belonging to Students’ Federation of India (SFI) and some teachers, burnt the chair of Maharaja’s College principal NL Beena on Thursday(19.01.2017) after barging into her office room.

Hailing from Iritty, Ammalu amma, fondly known as Ammu amma, was returning home by  jeep, after attending Uthaman’s (Killed by CPIM) creamation ceremony. The jeep was halted by throwing a bomb. Ammu amma and jeep driver Jazeela manzil Shihab were killed on the spot. Others suffered serious injuries.

They killed her husband…now her son also 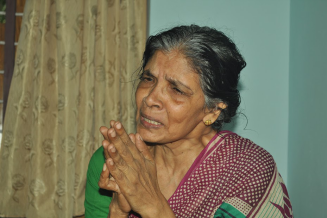 The gruesome killig of  Sri Ramith by the CPM goons on 12-10-2016 near his home at Pinarayi was a really shock to Kannur. He was killed while he was going to buy medicines for his niece. Ramith was attacked by a member of trained CPM goons who attacked him initially with iron rods and thereafter with daggers and swords. He was declared dead at hospital. He was the sole backbone of his family consisting of his mother and sister. He was just 26 years old. Ramith’s house belonged to Pinrayi Panchayath, the place of Chief Minister of Kerala Pinarai Vijayan.

The attempts to kill Ramith were planned long back. Immediately after the election results, his house were attacked on 19-May-2016 and his mother were threatened by saying that son Remith will be killed. Prior to that, on two occasions wreaths were laid in front his house, in order to threaten him with dire consequences in the event his association with our activities. The entire family was socially boycotted by the party leaders and openly declared that the family of Uthaman will not be allowed to have a decent living at Pinarayi. Shop owners were instructed to keep away from the family of Ramith. It is not a tit for tat, as painted now by the media, but a pre-planned murder carried out as instructed by the party leadership.

The father of Ramith, Sri Uthaman happened to be strong worker who was instrumental in raising nationalist organizations around his place namely Chavassery near Mattanur, which was once a CPM stronghold. He was in the forefront in questioning the atrocities created by CPM and acted as a backbone for our activities till his last breath. His activities proved dear for CPM, as hordes of CPM men started flocking towards Sangh in legions and this caused vengeance in the hearts of CPM leadership. He was a bus driver by profession.   He was killed on May 22, 2002, on broad day light on stopping his bus after throwing bombs, while the bus was heading to Irity. He was in the driver’s seat while he was hacked to death. He was attacked with swords and he died at the spot.

Chithralekha lives in Payyannur,Kannur. She hails from the SC community ( known as Dalit ). She is an auto driver. CPI(M) are not allowing her to do her job. Reason is she has not sought permission to drive auto from CPI(M) leaders. She sat infront of Kannur collectorate for 122 days but in vain. Now she changed her strike to Thiruvananthapuram to get justice. CPIM lead govt has charged criminal cases on her also.

Even a doctor can not live here 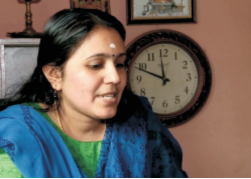 Dr. Geetha P. Nambiar is an Ayurvedic doctor. She opened her clinic at Kalliassery, Kannur.She could not run her clinic there due to dislike of CPI(M) local leader towards her.

Bharatiya Yuva morcha leader Smt. Lasith Palakkal is under CPI(M) threat for last few years. Because she works for nationalist cause. She couldn’t go to her home.

Karthik’s mother contested in Panchayath elections as BJP Candidate. Because of her candidature, CPI(M) attacked her son Karthik who is a LP school student.