There was nothing like #BandiChorrDivas. You engineered it to further divide Hindu & Sikhs for your cynical politics —not caring damn about what’ll be the spiritual costs of weaning Sikhs from their roots and larger culture and festivities. Here’s a thread, Hallelujah!

Here’s handwritten letter by Guru Tegh Bahadur, asking the congregation of Pak Pattan to visit him for DIWALI! He was the son of Guru Hargobind. So you know, but 9th Guru didn’t, that there was some Bandi Chorr Divas regarding his father. Really?!

Then here’s letter by Guru Hargobind’s grandson, Guru Gobind Singh Ji himself. Dated 5 Oct 1699, or AFTER formation of Khalsa. He too is asking congregation of Naushera Pannuan to visit him for DIWALI

. NOT some #BandiChorrDivas. You know better than Dashmesh Pita, again?

Then here’s Guru Gobind Singh’s oldest closest disciple, Bhai Mani Singh, who in his 90s was mμrdered in manner so gruesome that we remember him daily (बंद बंद कटवाए) He suffered the fate for he wanted to celebrate Diwali in HariMandir when it was still so precarious in Punjab..

Then here’s when Ahmad Shah #Abdali had completely blown up & desecrated HarMandir. While reconstruction was still not over & there was danger of further attacks, Diwali was so imp to Sikhs that large number still gathered at Amritsar (then Ramdaspur). Attack did come year later.

I can go further back or ahead in history to find many more examples but I think I’ve more than made my case. Please stop misleading people who innocently trust you. Be TRUTHFUL. Man needs his roots reach deep for him to fly high in sky. May your darkness lessen this Diwali

Calling Diwali ‘Jashn-e-Riwaz’ is part of an old linguistic tactic that Abrahamics have been employing for ages to belittle us. To begin with, they added ‘ism’ to ‘Hindu’ but ‘ity’ to ‘Christian’, implying ours is dogma, theirs is faith. Islam stays Arabic, bearing no English language influence.

To say Diwali is a riwaz (custom) is to make the subtle point that the festival has no religious roots. Just as it is customary to greet people when we meet, we observe Diwali. No more serious than wishing ‘good morning’!

Have you noticed that chaste Urdu speakers never refer to the script for Hindi, Devanagari, as Devvanagari? They call it Nagari ― implying there is no godly aspect to it. This is another subtle show of disregard for our culture

When I was a teacher, I noticed Muslim students deliberately writing Hindu as “hindu”, with a lower-case h, in their exercise books. Note that the English language associates a certain degree of respect/recognition with proper nouns and certain adjectives. Even in French, Français (with capital F) and français (small f) have different values attached. My Muslim students who wrote “hindu” while never referring to the followers of their own religion as “muslim” were making a clear case of comparison, projecting M as greater than h

Referring to Krishna as “the blue god”, Hanuman as “the monkey god”, etc are linguistic ways of saying our religion is alien and amusing. If pop iconography determines these terms, why is Jesus Christ not “the crucified god”? Why is Allah not “the invisible god”?

While Allah cannot be depicted in paintings, films, sculpture, etc, the name flashes Arabic calligraphy before the eyes. So, shouldn’t Allah be “the Arab god”? He isn’t. Even the Buddha is not “the Nepali (born in Lumbini) god”. Adjectives for “god” are preserved only for us.

@FabindiaNews has merely furthered n old agenda of ME religions to degrade others w/ linguistic subtlety. Hindus should’ve objected to references like “the festival of colours” (Holi) & “festival of lights” (Diwali), but they hadn’t understood the game until now.

Founder and editor-in-chief of @SirfNewsIndia, formerly with MyNation, Hindusthan Samachar, Swarajya, The Pioneer, The Statesman 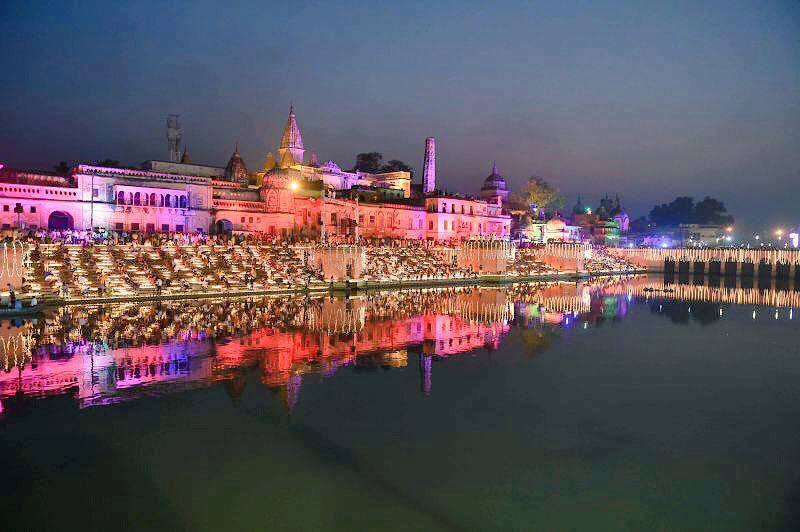