Jhalkaribai (November 22, 1830 – 1858) was an Bharatiya woman soldier who played an important role in the war of 1857 during the battle of Jhansi. She was a soldier in the women’s army of Queen Laxmibai of Jhansi. 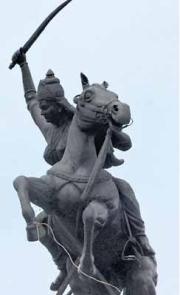 Jhalkaribai was daughter of a Sadoba Singh, and Jamuna Devi and belonged to Julahi community (weavers community). She was born on November 22, 1830 in Bhojla village near Jhansi. After the death of her mother, when she was very young, her father raised her like a boy. She was trained in horse-riding and using weapons. She soon became well-trained as a warrior. She killed a leopard in the forest with a stick she used to herd cattle.
Jhalkaribai bore resemblance to Rani Laxmibai. She married an artilleryman, Puran Singh, from the artillery unit of Rani Laxmibai. Jhalkaribai was introduced to the queen by Puran Singh. She joined her. After joining the army, she gained further expertise in all aspects of warfare.
During the Rebellion of 1857, General Hugh Rose attacked Jhansi with a large army on 23 March 1858. The queen valiantly faced the army with 4000 of her troops in her fort. She waited for relief from Peshwa’s army camping at Kalpi but it did not come because Tatya Tope was defeated by Rose. Meanwhile Dulha ju, incharge of Orcha Gate made pact with English and opened doors of Jhansi for English Army. The English Army rushed through and amidst this mayhem, Rani, on advice of her Courtier escaped through Bhanderi Gate with heavy fighting and casualties. On hearing escape,Jhalkaribai thought of a plan to confuse Gen Rose. Jhalkaribai set out for General Rose’s camp in disguise as the queen and declared herself to be the queen Laxmibai. This led to a confusion that continued for a day and she was released only after it was revealed that she was not the queen.