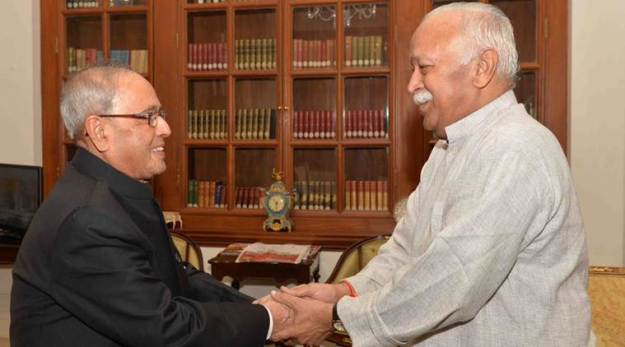 There has been unseemly outrage amongst certain sections of the political class on former president Pranab Mukherjee’s acceptance of an invitation as chief guest for the concluding ceremony of the RSS’s Tritiya Varsh Training programme. Mukherjee is a mature and experienced politician who has spent decades in public life. He has well-evolved ideas on matters that are of social and national significance. The invitation has been extended to him with the view that this will be an invaluable opportunity to listen to his views. Also, he will have the opportunity to listen to the views of the Sangh and have a firsthand experience of Sangh as well. This exchange of views and ideas is intrinsic to the Bharatiya concept of dialogue, this invitation and its acceptance is but a continuation of that democratic tradition, enshrined in our cultural ethos.

So why then the dissonance and negative commentary? Why the opposition to this exchange?

The resistance has surprised many, but if we were to delve into the ideological basis of this opposition it would be unsurprising. Bharat’s intellectual spectrum’s most vocal voices are those of, an ideology that is entirely alien to India and has been rejected the world over, for its high level of intolerance and violent means to achieve conformity, that is ‘Communism’. Their idea of “thought conformity” necessitates this approach that not only rejects healthy exchange among diverse stakeholders but protests it.

There is a lazy assumption that if you are not of a so-called leftist persuasion, then by default you are a “right winger” – their view of the ideological world exists in strict binaries, and as a result, you become someone who should be criticised, publicly shamed and protested against. This is the communist tradition, verifiable with human experience or rather oppression the world over. And yet despite repeated displays of intolerance, they adorn the mantle of human rights and free speech advocates.

A few years ago at the same program, an invitation was extended to renowned social activist and Magsaysay Award winner Abhay Bang. At that time as well eminent socialists with all kinds of ‘left leanings’ in Maharashtra were up in arms against his decision to accept the invitation. Their pressure politics to discourage engagement led to opinion pieces and articles in their Marathi weekly Sadhana. Bang responded to the pressure by stating that he was going to present his views at the function, so why the opposition? In fact, he went on to praise the open-mindedness of the RSS, who had invited him as an honoured guest despite knowing his views; in fact, it was the ‘leftists’ who were exhibiting their intolerance despite all their claims to the contrary in rhetoric. He remained firm in his decision to participate in the function and furthermore submitted the text of his speech to Sadhana for publication. However, the magazine that claimed to be the vanguard of free speech refused to publish his speech, despite the fact that he had been a past contributor.

In 2010, I met with Keshavan Nair, a CPM Trade Union leader from Kollam in Kerala. He had been expelled from the communist party for writing two articles in a local paper on “Science in the Vedas”. Singed by this hypocrisy, Nair decided to write extensively on Communists and even published a book – Beyond Red (which he gifted to me).

On the blurb of the book, he is quoted from the book that “The only freedom communists give you is to praise them”!

During one of my visits to Kolkata as Prachar Pramukh (Media Relations In Charge), whilst CPM was in power there, the local unit of RSS made an attempt to schedule appointments with the editors do Statesman, Indian Express, Times of India, Vartaman and a communist leaning newspaper. All granted time for the meeting but the Communist newspaper. The editor of the Left-leaning newspaper declined to give appointment saying he doesn’t want to waste his time. This is their democratic nature and commitment to free expression. The meetings were a success. We had no expectation that those who met with us would agree on every issue with the Sangh, but all were open to understanding and engaging with the RSS’s views. About the undemocratic attitude of the newspaper that declined appointment, I told our local karyakarta that whenever I shall come to Kolkata try to get an appointment with him.

A couple of years ago Dattatreya Hosabale and I were invited to the Jaipur Literature Festival to put forth the views of RSS about different social and national issues in an interactive open session with a journalist. We decided to accept the invitation and attend. At JLF as well there was opposition by Leftist forces.

Individuals like Sitaram Yechury and MA Baby boycotted the festival just because the RSS had been given a platform to air its views despite the fact that Sangh is increasingly finding acceptance, engagement and support from the society all over Bharat. Their elitist definition of free expression excludes even an attempt to understand such an organisation. But what is the motivation for such protest? Is it their fear that should the RSS be given an opportunity to reach out to a larger audience, the veil of misunderstanding, created by spreading canards will be lifted and the lies exposed. People will know the truth and that is the biggest fear of all.

The communist ideology and such fascist opposition to free speech are entirely against Bharatiya thought.

There is, however, another example that is in contrast to the ones elucidated so far. A few years ago a delegation from the Communist Party of China (CPC), visited India. They were interested in meeting with the Sangh and were invited at Keshav Kunj, the Delhi headquarter of RSS. I happened to be in New Delhi and received the delegation; they also gifted me a memento depicting the Great Wall of China. I was curious about their interest in the RSS. CPC being a political party, it was obvious that they meet leaders of different political parties here. But why meet the Sangh?

They answered that query by saying that they were a cadre-based political party and the Sangh was a cadre-based organisation, this had motivated them to reach out for an exchange of ideas.

To which I responded and underscored a distinction, “It is true but there is a basic difference between us. CPC is a political party that works for a state-power and through a state-power whereas we, the RSS on the contrary work through or for a state power. We work directly amongst the society with the support of the people.” Despite this articulated difference, we had a gracious meeting. We did not refuse to meet with them since having an exchange of views and ideas is the Bharatiya approach.

The intellectual world of Bharat is dominated by the people with some sort of ‘communist’ colour. And either because of the lack of original intellectual thinkers in Congress and other political parties based on individual/ family, territory or caste identity, or they have outsourced their ‘intellectual space’ to people with communist or left background. Though they talk of liberalism, democracy and freedom of expression, they invariably are seen exhibiting the communist ideological intolerance, intellectual untouchability and exclusion.

Pranab da’s decision to attend the RSS function has yet again revealed their hypocrisy.

The fourth Sarsanghchalak – Rajju Bhaiya had a deep friendship with a senior Congress leader from Uttar Pradesh. Once when he was visiting Prayag, the Congress politician was invited for an interaction over tea along with the prominent citizens of the city. However, the politician regretfully declined, stating that whilst he wanted to attend, his presence would lead to unnecessary and unpleasant chatter amongst his colleagues in the party.

Rajju Bhaiya was startled by this reticence and asked his friend if they would indeed make him the point of discussion. To which the politician responded dolefully that his friend from the RSS had no idea of how politics worked. Rajju Bhaiya informed him that in the Sangh it was very different. Were the two seen in each other’s company by swayamsevaks, they would not doubt his intentions at all; in fact, they would assume that he must be explaining Sangh to his friend. How can the Congressmen do not trust such a tall leader of their own?

History repeats itself all these years later when a towering and experienced leader who is also the former President of this nation is being questioned by junior leaders from his party, some who regretfully possess shady reputations and not even half of his experience.

How is it that not one swayamsevak has questioned why the former president and Congress stalwart has been invited? This is the difference between the thought process of the RSS and those who claim to be vanguards of free expression.

It is Bharatiya tradition to exchange ideas with a diverse set of people. To reject and protest such an exchange is non-Bharatiya and an assault on our democratic traditions, as a culture and the largest democracy in the world.

However, this debate over Pranab da’s presence at the Tritiya Varsha concluding ceremony in Nagpur has revealed the true face of these so-called proponents of free speech.

Furthermore, Pranab da has resisted these attempts to publicly shame him and has been statesmanlike in his response, stating that he will answer with his speech in Nagpur, emphasising thus, that his decision to attend is unwavering. We welcome his decision and his true spirit of democracy.