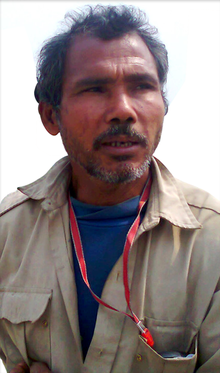 An unbelievable story of an vanavasi( tribal )  from Assam, the echo of whose work travelled thousands of kilometers from the waters of Brahmaputra to the President at Rastrapati Bhavan in New Delhi.

It has been believed that our holy river Brahmaputra has invoked harm and misery for the north east of India.  The reason being, the river Brahmaputra by the time it reaches Assam, carries long distance sand, soil, mountain rocks, huge debris along its course. As a result, the course widens till the time it reaches the banks of Assam, badly affecting the villages lining the banks. Every monsoon the flood waters, would wash away the plantations, trees and villages, altogether leaving the banks as a barren land.

In the year 1979, the young Jadhav Payeng after his 10th class exams, came back to his village and was strolling on the swiped out banks of the river Brahmaputra. He was taken aback to see more than 100 dead snakes lying on the banks.

Moving ahead, he realized that the entire bank seems to have been converted into a crematorium of dead reptiles and animals. He felt very sad and was deeply moved by this sight. This left him sleepless for several nights. His village elders told him that due to the decline in forest cover and deforestation, animals lost their homes. Young Payeng was absolutely convinced by their talks.

The very next day, the 16-year-old Jadhav, himself decided to plant few trees, and planted 50 seeds and 25 bamboo saplings. More than 35 years later, today the then washed away barren land host 1360 acres of lush green forest without any government aid or support.

The forest is now home to 5 Bengal tigers, more than 100 deers, wild boars, around 150 wild elephants, rhinoceros and many more wild animals. To widen the forest area, young Jadhav would travel early morning, 5 kms on a bicycle, crossing the river. He would plant more tree and saplings on the other side of the river and come back in the evening.

He planted many trees like Jackfruit, Gulmohar, Bamboo, Pineapple, Custard Apple, Mango, Jamun and many other trees.

The most astonishing fact, is that our fellow citizens were unaware of the great contribution of young Jadhav. This dedicated man, lost in his own world of bringing in the green revolution was noticed by the ace wild life photographer- Jitu Kalita. This wild life photographer made a documentary film by the name, ‘The Molai Forest’. This film was showcases in the renowned universities.  Another documentary film named, ‘Foresting Life’ made by Arti Srivastava which highlighted the untouched incidences and difficulties faced by the young Jadhav. The third film, ‘Forest Man’ was highly appreciated at the International Film festival.

It is unbelievable that a man from an extreme remote area, strangely who did not even possess a ration card has single handedly, without any financial and government support grown a forest spreading in thousands of acres. People knowing him were surprised to see forest grown by him and it came to be known as ‘Mishing forest’ after him. (Jadhav belongs to Mishing tribe from Assam) Slowly Jadhav had started sheltering cows and many other pet animals for his livelihood. Although some of his pet animals were hunted by the tigers, still his love and compassion for wild animals kept on rising.

A year back he was awarded the highest civilian award, Padma Shri. Despite this prestigious fact, Jadhav Payeng still resides in a shattered bamboo hut and is occupied with his traditional daily chores of tree plantation.

It’s astonishing that, what the ministry of environment and forest department has not been able to achieve respite spending lakhs of rupees, has been achieved by the sole determination of Jadhav Payeng.

Let’s salute the selfless and relentless efforts of this worshipper of nature who has made the impossible-possible, of converting a barren sandbar to a lush green forest thriving with wildlife.

Translation by Smt.Nipa Shah from a Hindi message received on Whatsapp

1 thought on “Jadav Payeng & the Story of Mishing Forest”