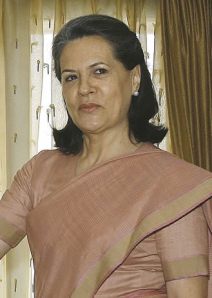 This is an article written in 2004 when Sonia Gandhi was projected as a Prime ministerial candidate. Some of the material is summarised from material collected from Dr.Subramanya Swamy and Sri Gurumurthy’s articles. Some of the predictions that Rahul Gandhi would become the General secretary of the congress have come true and it does seem that the dangers that are before the nation remain.

WHY SONIA AS OUR PRIME MINISTER IS A NATIONAL CALAMITY ? – Written in May 2004

Over the past few months, and more so over the last few days the debate on whether Sonia (Antonia Maino) should be allowed to become Prime Minister of the World’s largest democracy, Bharat is under fierce debate.

People who defend her say that our culture has always been open and those who oppose her are narrow-minded and insult the women folk of our country since she is our “bahu”.

As an attempt to explain why we are opposed to Sonia ( Antonia Maino) as Prime Minister of our country, we have listed some of the issues that require examination. We request you to read them and decide for yourself whether you can accept her as the Prime Minister of our country OR would join us in our effort to expose and oust her thereby keeping the pride of our nation high.

1.The Prime Minister & Access To Nuclear Weapons : The Prime Ministerhandles a particular file, which contains all the secrets of the government. Where the nuclear weapons are , where the missiles are, who can press the button, which missile points in which direction, who are our spy links in different countries? This single file contains all this information. That file is not handled by anybody other than the Prime Minister of India. If it falls into wrong hands, it will strip India naked before inimical forces. `Can we afford to hand over these secrets to her? ` Even the Defence Minister cannot do anything; he cannot look at that file. Even the services chiefs know only their part of the secret. The combined, collective national secret would be in the hands of this foreigner.

2. Sonia’s Relation With India :
a. Citizenship: Unlike foreigners like Sister Nivedita & Annie Beasant, Sonia’s love was not with our country but with Rajiv Gandhi. Compare Nivedita with Sonia Maino. When Sonia came to India in 1968, she was wedded to an Indian who was the son of our Prime Minister. She did not apply for Indian citizenship in 1968 when she married Rajiv and came to India. She applied for India Citizenship in 1983 only when a case was filed against her that it was improper to have a foreigner living permanently in the prime minister’s house.

b. Spy Connections: It has been alleged that she had connections with the Italian spy network since 1968. She even brokered a security deal for Indira Gandhi’s bullet-proof car through her brother at Italy. The car was contracted from Germany.

c. Lack of faith on India: When Rajiv Gandhi was alive, the security of their entire family was organized by Italian security agencies. Jack Kunzi, Commissioner of Police at Geneva taunted a RAW official “Your Prime Minister’s wife does not seem to trust you or your embassy. She gets the security for her children co-ordinated by Italians.” George, her secretary, used to directly communicate to western agencies through Italian Embassy in Delhi and the Italian foreign office in Rome.

d. Her Bofors Connection : . Among those who are the suspected beneficiaries of the Bofors deal is Ottavio Quattrocchi, Italian family friend of Sonia Gandhi, who tried to cut into the commissions, Bofors were paying to their long time agent

e. Land Grabbing: She showed immense cunning after her husband’s demise in starting the Rajiv Gandhi Foundation. She grabbed the land allotted to the Congress party for its national headquarters. During the Narsimha Rao government, she got allocated one billion rupees even as part of the nation’s gold lay mortgaged abroad. She has since then obtained total control over the wealthiest cultural institution of the country, having a corpus of one billion rupees and 21 acres of prime land in New Delhi valued at 50 billion rupees.

f. Abandoning the Country During Crisis: During the 1971 War, she ran away with her husband breaching the discipline of commercial pilots.

3. The Mystery Behind Her & Her Pretensions: How she met Rajiv Gandhi in England? What she was doing in England when she met him is still a mystery. She brought her family into the security matters of India even when Indira was alive. She forced Italian security on India even when Rajiv Gandhi was alive. She openly distrusted Indian security and diplomatic system and privately liaised with the Italian diplomatic system for her security. If she did this when Indira was
alive; if she went as far when Rajiv was alive; if she did this when she was just out of the Congress and out of power, what will she do when put in power?

Or what she will not? Yet she pretends to die for India. This is not real Sonia. The whole western world, not exactly the friends of India, knows about her. But not we, in India. We do not know the real Sonia.

Have You Ever Asked These Questions?

Why do we have rules in the army which prohibit a foreigner, a foreign born person, even though he is a citizen, from occupying certain high-ranking offices in the army? Why do we say that our IPS officers should not be of foreign origin? Why do we say that our IPS officers cannot marry foreigners? Now, herein comes the idea of the modern nation-state. A modern nation-state has a built-in insecurity and that is the reason why it has to secure itself. But can the Prime Minister have a foreign wife? Can the Prime Minister’s son have a foreign wife? Or More so Can We have a Foreigner as Prime Minister?

The Legacy Would Continue:
Rahul, who like Rajiv Gandhi may become the general secretary of the Congress and is being groomed as the successor to her mother, is set to marry a foreign national. So, this demeaning thought will not stop with Ms Gandhi. This can be countered only by arousing the spirit of India which was the drive of the freedom movement. In the first freedom movement, we became free to think and act independently, but we never turned the freedom into Independence. Will the spirit of our freedom movement manifest again to make the free India really independent India?

Will You Join This Movement for Restoring National Pride, Or Would you prefer Someone else to do the Job For You ?

The nomination of Ms.Sonia Gandhi as a candidate for Lok Sabha from Rae Bareli is liable to be rejected because her name does not appear in the Home Ministry records of all registered citizens of India. There is a name of one Ms.Antonia Maino, born in Luciana, Italy, who has been granted citizenship of India in 1983. But Ms.Sonia Gandhi claims, according to Lok Sabha records, as having being born in Orbassano, Italy. Moreover there is no G.O or official notification which is required, that Sonia Gandhi is the changed name of Ms.Antonia Maino.