In the riots at Muzzafarnagar, Azam Khan of the Samajwadi Party was alleged to have instructed the state administration to show a blind eye to attacks of Muslims on Hindus.

Taking a cue from their partner in centre, the Congress Gen Secretary, Rahul Gandhi tried to gain brownie  points by bringing in the issues that ISI is gaining ground in Muzzafarnagar due to the attacks.

The Aam Aadmi Party leader Arvind Kejriwal, probably taking inputs from his “civil society brethren” went a step further by accusing the BJP and the RSS of engineering the riots. He issued a public statement stating ” While, the spark came from a ten-day old local conflict, it is clear that the situation has assumed its current proportion due to overt and covert stoking of communal fire by the RSS-BJP combine and the Samajwadi Party government. On the one hand, the presence of several political leaders, mostly from the BJP, in the Maha-panchayat that preceded violence confirms the suspicions about the role of RSS-BJP .”

However, on realising that the lies are being exposed, the party just took off the statement from the site.  This is inspired by the “Spit and Run” journalism that the commie brigade follows. 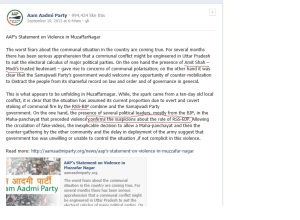 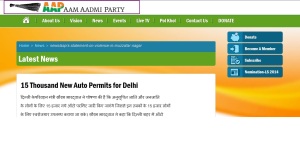 The link of statement now stands deleted from website

The patterns of taking cues from each other also establishes the fact that as established in our earlier article AAP is  a camouflage of the Civil Society-Congress brigade .