–  By Dr.Jay Raman from USA ; Retold by Sri Shyam Prarande of Sewa International

Photo courtesy Sri Santosh Prabhu who also made a personal visit to this place.

India has made tremendous progress in the field of heath care in recent years. Gleaming multi specialty state of the art hospitals are mushrooming all over the big cities. These medical mammoths can provide all the latest investigations and treatment, of course at a very steep price, which is beyond the reach of most of the ordinary people. The marginalized sections of the society cannot even dream of such care. They still lack even the basic necessities of health care. This is the story of a hospital which cares for the most marginalized section of the society, the tribals and the dedication of a physician which made it a reality against heavy odds.

Kerala, named God’s own country can boast of life indices like infant mortality and maternal mortality comparable to Western countries. Unfortunately these statistics are not applicable to the tribals who live mainly in the Wayanad district nestled in the Western Ghats wedged between Kerala, Karnataka and Tamilnad. The verdant ever green rain forests covering the hills .the misty valleys and the clear blue lakes make Wayanad perhaps the most beautiful part of Kerala. Unfortunately this paradise on earth contains some of the poorest people in the world. The tribals form nearly 20%of the population and are scattered all over the district. They comprise of nearly 18 tribes like Kuruchia, Kuruma, Panniya ,Adiya etc. These people have a proud history. When the Raja of Pazazhi fought the British in early 19th century they formed his shock troops. When their leader Thalachal Chandu was killed by the British, the distraught Raja is said to have lamented “ I have lost my right hand.” The advent of modernity has not been very kind to the tribals who failed to keep up with changing times. This was exploited by the ruthless immigrants from the plains who converted the tribal lands to tea plantations and resorts making these simple people landless in their own lands. Along with this poor health, ignorance and social evils like alcoholism contributed to the present sad state of affairs.

The drive from Kozhikode to Wayanad is a thrilling experience. The road from Adivaram (the foot hills) to Kalpetta the capital of the district is a real Ghat road with nine hair pin curves. Accidents are common. Few weeks before my trip there was a tragic accident in which a young doctor lost his life. From Kalpetta about fifteen Kilometers into the interior lies the village of Muttil. It is here that in 1980 a young doctor Dr. Sagdeo started a small clinic Swami Vivekananda Medical Mission to help the tribals. It was humbling for me a doctor from Kerala to see that it was a doctor from Maharashtra who started this noble venture. 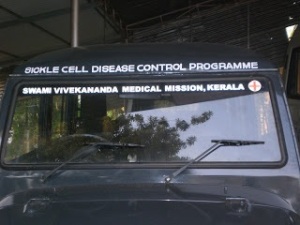 I spent a few days there and Dr. Sagdeo was kind enough to brief me on all the unique aspects of this medical facility. Having spent nearly 30 years with the tribals, I could not have asked for a better source than the humble doctor. The basic concept was to take medical care to the tribals and not vice versa. The tribals are by nature suspicious of outsiders and the first step was to win their trust. Equally important was to involve them in activities aimed at their own welfare .Essentially the emphasis was on horizontal spread of health care and not the vertical one, so that the maximum people will be benefitted from the limited resources available.

From a humble beginning the medical mission has developed into 30 bed modern facility with inpatient care including maternity care, outpatient clinics with 3 full time doctors. It also has X-ray, Ultra sound, laboratory, pharmacy and other ancillary services. One unique feature is the six subcentres run by mobile units who literally take health care to the tribal homes. In addition the centre also provides specialty care in ophthalmology, pediatrics, E.N.T. etc. by doctors who visit on a regular basis.

One field ,the medical mission has done yeoman service is in the detection of Sickle cell anaemia among the tribals. Dr. Sagdeo and his team first described this in 1994. Later in1999 All India Institute of Medical Sciences at New Delhi joined with the mission to introduce the first pilot project. More than 70% of the tribals were screened. A separate trust “SCRARF” was formed to continue the campaign .The hospital cares for a lot of inpatients with complications of sickle cell anemia. They also run an active awareness program educating them about preventive measures like avoiding marriages between Carriers of the trait.

Tuberculosis is a scourge among the tribals causing high morbidity and mortality. The centre has an active microscopic and treatment center. Alcoholism is also a major issue which leads to medical and social problem. To manage this, they have started an alcohol rehabilitation program. 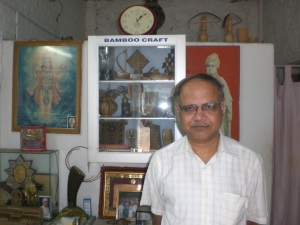 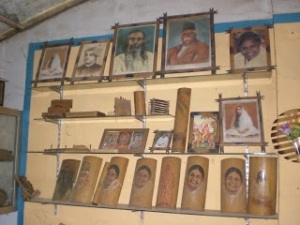 Dr. Sagdeo explained that to improve the health status of the tribals just improving the health facilities alone is not enough. The overall progress of the tribals is the long term solution. With this in mind, the mission is involved in many social uplift programs. Bamboo craft centers help the tribals to preserve their traditional handicrafts and also make some financial gains. This has been especially useful in rehabilitation of the sickle cell patients.

Mission also plays an active part in organizing self help groups, micro insurance programs etc to help the tribals to achieve progress through self reliance. Dr. Sagdeo had a word of caution about making the tribals too much dependant on government and other hand outs.

In the field of education and culture preservation also the centre plays an important role. About one hundred Vidya Kendras (Coaching centers) have been established among the tribal villages along with small libraries and reading rooms.

As Dr. Sagdeo said with humility the mission’s five point program of Shikshan, Swasthya, Sanskar,Swavalamban and Samajik serves nearly one lakh of people.

As I drove down the hair pin curves I remembered the poignant words of Swami Vivekananda “The best way to serve Narayana is to serve the Daridra Narayana.” I had the satisfaction that I have seen one place where Swamiji’s words are not limited to just lip service but actively put to practice.