By constructing a common cemetery for all castes, Metpally village is one step ahead of other villages in social harmony (sāmarasata). All castes share a common cemetery in Metpally (chinna) village, Keshavapatnam mandal, Karimnagar district. 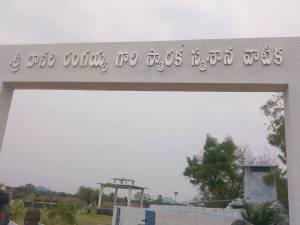 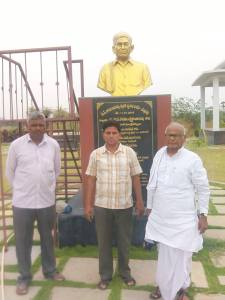 By allowing all the opportunity to enter into Siva’s ground, the village elders have inaugurated a movement to create social goodwill in all, which is unmatched in the history of the state. Like many other villages, they have demonstrated splendid ideals by taking a step forward, at a time the tangled knots of untouchability in Hindu society are being loosened. 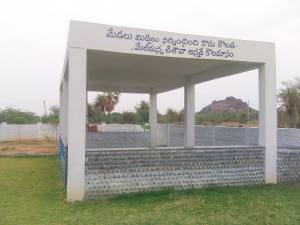 The sub-inspector of Husnabad, Sri Bhoomaiah, Sri Tummala Sriram Reddy were the chief l eaders of this divine activity. At a time when caste divisions are playing into caste politics, for providing a common facility for last rites to everyone, they alloted 20-30 kuntas, spent Rs. 20 lakhs, and built a cemetery that looks like a beautiful park. The facility is large enough to allow two cremations simultaneously. While cremations normally cost Rs. 15,000, here the cost of a cremation is estimated at only Rs. 5,000. With contentment, one can watch here the rites that enable the departed soul to reach an auspicious end.

The daily upkeep and organisation of the facility are being looked after by Sri Satyam, who runs a mechanic shop, Sri Ravi, Sri Ellareddy and other close companions. The cemetery was inaugurated in February, 2016, this year. It has witnessed so far (till June) nine cremations including those of two from Scheduled Caste community. Arrangements have been made for water for bathing and for wood so as to avoid inconvenience to the users.

This achievement of Metpally village is like a slap on the face of those who shout themselves hoarse from any available mike that the atrocities of the forward castes have increased, and is a standing reproof to those who support untouchability by arguing that all fingers are not created equal. It is also a lesson – instead of fighting, all village elders and youth should accord respect to everyone irrespective of caste, and build the feeling of harmony.”

In his Vijayadashami address in 2015, Sarsanghchalak of RSS had called for Hindu society to work towards ensuring that all HIndu have common access to temple, cemetery and water sources. Metpally village stands as an example in that direction.  This is #Hindutva in action.