NGO Amnesty International was booked for sedition charges by Bangalore police after anti-India slogans were raised in an event hosted by the NGO for human rights. During the event ‘Broken Families’ at United Theological College which was organized on Saturday as a part of a campaign to seek justice for victims of human rights violations in Jammu and Kashmir, anti-India slogans were raised the some members of the audience. 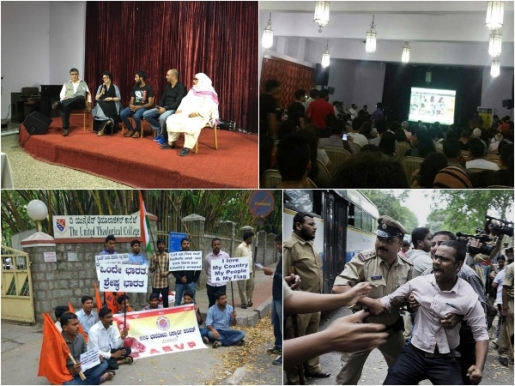 The event was attended by activists, journalists and the relatives of Kashmiris who had gone missing allegedly because of covert operations by security forces. Several families shared their stories of loss, while others presented their views on the current situation in the state. Among the panellists were journalist Seema Mustafa, and former journalist RK Mattoo.
Heated arguments began when Mattoo praised the Indian Army called them very disciplined. Some of the members of the audience took objection to these remarks. some “pro-freedom” Kashmiris, most of whom were youngsters and students, entered into heated arguments with a Kashmiri Pandit leader for hailing the Indian Army and shouted Slogans for and against the army presence in Kashmir were raised. Later on, people also raised slogans for ‘azaadi’.
Opposing these, the members of the Akhil Bharatiya Vidyarthi Parishad complained the matter with the Bangalore police.  ABVP demanded the arrest of people who participated in this anti-national program. They also claimed that when ABVP workers came forward to stop this, they were assaulted. ABVP activists, who staged a protest on Monday against the event, had also filed a complaint with the police along with a CD containing video recording of the event. Karnataka Home Minister G Parameshwara had yesterday said the intention and background of those involved will be investigated.
According to the complaint of the ABVP, a student organisation, participants “sang anti-national songs, raised anti-national slogans, made anti-India and anti-national speeches and raised slogans saying India’s Kashmir should go to Pakistan.” It also claimed that the event supported terrorism and Pakistan’s Inter-Services Intelligence, and was thus anti-India.
The case was registered under IPC sections — 142 (being member of an unlawful assembly), 143 (whoever is a member of an unlawful assembly), 147 (rioting), 124A (sedition), 153A (promoting enmity between different groups on grounds of religion, race, place of birth, residence, language, etc., and doing acts prejudicial to maintenance of harmony). However, the police said they would investigate the matter before making any arrests.
After the event, the Amnesty released a statement saying, “Amnesty International as a matter of policy does not take any position in favour of or against demands for self-determination. However, Amnesty International India considers that the right to freedom of expression under international human rights law protects the right to peacefully advocate political solutions that do not involve incitement to discrimination, hostility and violence.”

A case has been filed under various sections of the Indian Penal Code, including unlawful assembly, rioting, sedition, promoting enmity and common intent. However, the police said they would investigate the matter before making any arrests.