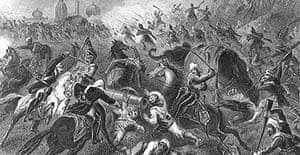 The battle of Cawnpore – the entire British garrison died at Cawnpore (now Kanpur), either in the battle or later massacred with women and children. Their deaths became a war cry for the British.

A controversial new history of the Indian Mutiny, which broke out 150 years ago and is acknowledged to have been the greatest challenge to any European power in the 19th century, claims that the British pursued a murderous decade-long campaign to wipe out millions of people who dared rise up against them.

In War of Civilisations: India AD 1857, Amaresh Misra, a writer and historian based in Mumbai, argues that there was an “untold holocaust” which caused the deaths of almost 10 million people over 10 years beginning in 1857. Britain was then the world’s superpower but, says Misra, came perilously close to losing its most prized possession: India.

Conventional histories have counted only 100,000 Indian soldiers who were slaughtered in savage reprisals, but none have tallied the number of rebels and civilians killed by British forces desperate to impose order, claims Misra.

The author says he was surprised to find that the “balance book of history” could not say how many Indians were killed in the aftermath of 1857. This is remarkable, he says, given that in an age of empires, nothing less than the fate of the world hung in the balance.

“It was a holocaust, one where millions disappeared. It was a necessary holocaust in the British view because they thought the only way to win was to destroy entire populations in towns and villages. It was simple and brutal. Indians who stood in their way were killed. But its scale has been kept a secret,” Misra told the Guardian.

His calculations rest on three principal sources. Two are records pertaining to the number of religious resistance fighters killed – either Islamic mujahideen or Hindu warrior ascetics committed to driving out the British.

The third source involves British labour force records, which show a drop in manpower of between a fifth and a third across vast swaths of India, which as one British official records was “on account of the undisputed display of British power, necessary during those terrible and wretched days – millions of wretches seemed to have died.”

There is a macabre undercurrent in much of the correspondence. In one incident Misra recounts how 2m letters lay unopened in government warehouses, which, according to civil servants, showed “the kind of vengeance our boys must have wreaked on the abject Hindoos and Mohammadens, who killed our women and children.”

Misra’s casualty claims have been challenged in India and Britain. “It is very difficult to assess the extent of the reprisals simply because we cannot say for sure if some of these populations did not just leave a conflict zone rather than being killed,” said Shabi Ahmad, head of the 1857 project at the Indian Council of Historical Research. “It could have been migration rather than murder that depopulated areas.”

Many view exaggeration rather than deceit in Misra’s calculations. A British historian, Saul David, author of The Indian Mutiny, said it was valid to count the death toll but reckoned that it ran into “hundreds of thousands”.

“It looks like an overestimate. There were definitely famines that cost millions of lives, which were exacerbated by British ruthlessness. You don’t need these figures or talk of holocausts to hammer imperialism. It has a pretty bad track record.”

Others say Misra has done well to unearth anything in that period, when the British assiduously snuffed out Indian versions of history. “There appears a prolonged silence between 1860 and the end of the century where no native voices are heard. It is only now that these stories are being found and there is another side to the story,” said Amar Farooqui, history professor at Delhi University. “In many ways books like Misra’s and those of [William] Dalrymple show there is lots of material around. But you have to look for it.”

What is not in doubt is that in 1857 Britain ruled much of the subcontinent in the name of the Bahadur Shah Zafar, the powerless poet-king improbably descended from Genghis Khan.

Neither is there much dispute over how events began: on May 10 Indian soldiers, both Muslim and Hindu, who were stationed in the central Indian town of Meerut revolted and killed their British officers before marching south to Delhi. The rebels proclaimed Zafar, then 82, emperor of Hindustan and hoisted a saffron flag above the Red Fort.

What follows in Misra’s view was nothing short of the first war of Indian independence, a story of a people rising to throw off the imperial yoke. Critics say the intentions and motives were more muddled: a few sepoys misled into thinking the officers were threatening their religious traditions. In the end British rule prevailed for another 90 years.

Misra’s analysis breaks new ground by claiming the fighting stretched across India rather than accepting it was localised around northern India. Misra says there were outbreaks of anti-British violence in southern Tamil Nadu, near the Himalayas, and bordering Burma. “It was a pan-Indian thing. No doubt.”

Misra also claims that the uprisings did not die out until years after the original mutiny had fizzled away, countering the widely held view that the recapture of Delhi was the last important battle.

For many the fact that Indian historians debate 1857 from all angles is in itself a sign of a historical maturity. “You have to see this in the context of a new, more confident India,” said Jon E Wilson, lecturer in south Asian history at King’s College London. “India has a new relationship with 1857. In the 40s and 50s the rebellions were seen as an embarrassment. All that fighting, when Nehru and Gandhi preached nonviolence. But today 1857 is becoming part of the Indian national story. That is a big change.”

Charles Dickens: “I wish I were commander-in-chief in India … I should proclaim to them that I considered my holding that appointment by the leave of God, to mean that I should do my utmost to exterminate the race.”

L’Estaffette, French newspaper: “Intervene in favour of the Indians, launch all our squadrons on the seas, join our efforts with those of Russia against British India …such is the only policy truly worthy of the glorious traditions of France.”

The Guardian: “We sincerely hope that the terrible lesson thus taught will never be forgotten … We may rely on native bayonets, but they must be officered by Europeans.”