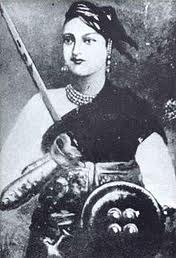 Manikarnika, aka Rani Jhansi Lakshmibai played an extremely heroic role of the War of India’s  Freedom. She lived for only twenty-two years. She became a widow in her eighteenth year. Jhansi, of which she was the queen, was in the grip of the cunning, cruel British. She was the embodiment of patriotism, self-respect and heroism. She was the queen of a small state, but the empress of a limitless empire of glory.

She was a woman although in her tender body there was a lion’s spirit. But she was well versed in statesmanship. Like all women she was weak. But when she went to war and took up arms she was the very embodiment of the War Goddess Kali. She was beautiful and frail. But her radiance made men diffident. She was young in years. But her foresight and firm decisions were mature.

When, after growing up under the loving care of her father, she entered her husband’s house she became an ideal wife. On the death of her husband although she lost interest in life she did not forget her responsibilities.  She lead her army in the War for Independence.

Lakhsmi Bai lived but for 22 years and seven months – from the 19th of November 1835 to the 18th of June 1858; she flashed and disappeared like lightning on a dark night.

The words of the British General Sir Hugh Rose, who fought against the Rani several times and was defeated again and again, and finally defeated the Rani (who became the victim of circumstances) bear witness to her greatness:  “Of the mutineers the bravest and the greatest commander was the Rani.”

Smt. Subhadra Kumari Chauhan immortalized her by the following poem