Once an award winning chef, 32-year old Narayanan Krishnan of Madurai has served meals to over 19 lakh mentally disabled, sick, old and homeless destitutes living on roads, under bridges or crannies between the temples.

Out of country’s total 21,906,769 disabled population about three lakh of them are mentally disabled. Large number of them are found living uncared on roadsides without clothes, food, and in highly unhygienic conditions. Madurai-based Narayanan Krishnan left the lucrative job of a chef in Switzerland and started serving the mentally disabled, old, sick and homeless destitute living or dying on roadsides in his hometown Madurai. His life mission totally changed when he saw a mentally disabled eating his own waste out of hunger. He started serving meals to such people utilising his own personal savings in 2002, and till now has served meals to around 19 lakh destitutes. Interestingly, he himself cooks and serves the meals. Not only this, he also learnt hair cutting when the local barbers refused to shave such people. It is an outstanding example of restoring dignity to the human life.

Tonnes of cooked food go waste in the parties whether hosted in hotels, banquets or parks of the cities almost every day. On the other hand, lakhs of people go to bed without food everyday. The condition of those who are mentally disabled is very miserable, as they are not aware of their basic needs—when to eat, what to eat. This thought changed the life mission of Madurai based Narayanan Krishnan to such an extent that he turned down the offer of a chef’s job in Switzerland and started serving this most neglected section of the society living and dying on the roads in Madurai. 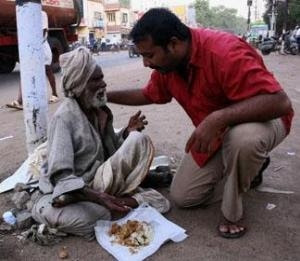 Since 2002, Narayanan has served millions of meals, three times a day — breakfast, lunch and dinner — to the mentally ill, destitute and abandoned in the city. Now he has set-up Akshaya Home in Madurai and housed more than 450 mentally disabled people after rescuing them from the roads. It is a complete home equipped with modern kitchen, hospital and entertainment facilities. Narayanan personally devotes time for preparing and serving the meals. The gratitude and happiness seen on the faces of the inmates after taking the meals cannot be expressed in words.

Apart from feeding, Narayanan also provides quality medical care to all the residents with the help of doctors. Periodically, dental camps are also conducted to improve the personal hygiene. If any of the residents falls sick, he or she is immediately is taken for emergency care. The Trust also gives special care to beneficiaries who are very sick bringing back to normal life. “Since I personally know all the beneficiaries since the last 12 years, I spend almost 18 hours a day interacting and mingling with them. They get a secured feeling,” says Narayanan.

At the age of 19, with a degree in hand, Krishnan was selected to be a chef in a five star hotel of Switzerland. A single moment changed his life; seeing a man eating his own waste out of hunger. This made him realise how much we take for granted and how much we waste (even if it is unintentional), by throwing parties at banquet halls to honour people. So much food is wasted. Hundreds of people come, but only a handful eats the food.

When Narayanan decided to quit his dream job to serve such people, it was a little harder for his middle class parents to understand completely until the day he took his parents to show them why he was giving up his dream. A man on the street looked up at Narayanan’s parents and boldly said, “We are able to get three meals a day because of your son.” Touched by that man’s words, Narayanan’s mother said to him, “My dear son, you feed all these people, I will feed you till I am alive.”

In 2003, Krishnan founded Akshaya Trust. Akshaya means never-ending. That is exactly what he and his team of volunteers provide for the homeless– never ending aid. Over 12 years, he has been able to serve almost 1.9 million hot meals to the elderly and the mentally disabled—non-stop without any break, come rain or shine. Since the mentally sick people are not aware of their needs, they are found on the roads in very miserable condition—long hair, dirty clothes, lying in dirt and highly unhygienic condition. In 2005, Narayanan approached a team of barbers of Madurai to help give haircuts to such homeless people, but without any success, he took matters into his own hands, “I went to a hair cutting training school for six months, learnt hair cutting and till then has done thousands of haircuts for people.”

Before setting-up of Akshaya Home, Narayanan and his team travelled to great lengths to serve the meals. “We travelled 35 miles for breakfast, 35 miles for lunch and 35 miles for dinner.” Even now Krishnan’s day begins at 4 am. He and his team roam in a donated ambulance in the city and find the homeless poor souls under bridges, crannies between the city’s temples.

Another outstanding achievement of Narayanan is that some of the mentally disabled who were till just 6 months ago on the streets without hope or dignity, are today able to lead a life that has some semblance of normalcy. Some help in preparations of meals, while some have been trained to clean the dining hall, set the tables, clean-up after the meals, washing the clothes, housekeeping or look after the garden. Even the last rites are performed with full respect and honour. It is important because many of such people die on the roads and sometime last rites are not performed for days until the dead body starts decomposing and somebody complain to the police of foul smell. The inmates are also engaged in craft works and in indoor games. The quantum of happiness and satisfaction on their faces cannot be expressed in words. Surely, there can be no better rehabilitation of these people as has been done by Krishnan. The love and affection he shows while serving these people is outstanding.

Gandhiji had said, “Be the change you want to see in the world.” Narayanan Krishnan truly imbibed these words and set a precedent for all of us to follow.

Shri Narayanan Krishnan of Akshaya Trust Madurai has been awarded with Prof. Yashwantrao Kelkar Yuva Puraskar 2013. This award is given to recognise his outstanding work in helping the helpless, homeless, sick, mentally ill and destitute by providing healthy food, care and opportunity to rehabilitate to restore human dignity.  The award comprises of Rs 50,000 cash, certificate and a memento. He was felicitated with the Award in a special function at the National Council of Akhil Bharatiya Vidyarthi Parishad held on November 30 in Varanasi.

This award is given in the memory of the late Prof. Yashwantrao Kelkar, whose contribution was like a foundation stone to build up and flourish ABVP, the world’s largest students’ organisation. This award is being given since 1991. This is a collaborative activity of ‘ABVP’ and ‘Vidyarthi Nidhi Trust’, both committed for the cause of uplift of education and students.’ The idea behind this award is to encourage young social workers, engaged in various social welfare activities and to offer them a platform, thereby to motivate other youth for social work as well as to express gratitude to the young social workers.