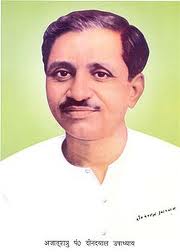 Pandit Deendayal Upadhyaya (1916 – 1968) was an eminent political personality and a profound philosopher. He became a pracharak of the RSS after completing his M.A.

In 1950, Dr. Syama Prasad Mookerjee, then Minister at the Center, opposed the Nehru-Liaquat pact and resigned his Cabinet post and joined the opposition to build a common front of democratic forces. Dr.Mookerjee sought Shri. Guruji’s help in organizing dedicated young men to pursue the work at the political level.  Pandit Deendayal has been the source of ideological guidance and moral inspiration many social activists and political leaders.

The pioneer of Integral Humanism or ‘Ekatma Manava Darshan’,  ‘Integral Humanism’, is a critique of both communism and capitalism, advocating a holistic alternative perspective for political action and statecraft consistent with the laws of creation and the universal needs of the human race. Deendayalji was a great advocate of indigenous economics & administration models.

He was never enamoured of any position. He was not a Member of Parliament, but he was the maker of Members of Parliament.

His Murder : Pt. Deendayal Upadhyay was murdered on 11th Feb 1968 at Mughalsarai in UP. His death was as shocking as it was mysterious. The mystery remains unsolved to this day. Everyone was stunned by his untimely demise.

The greatness of Deendayalji can be assuaged by the tributes paid by Guruji Golwalkar.

“Those who realise and recognise their duties and responsibilities as a swayamsevak right from their student days and spend all their time and energies in organization work are a rare breed. Upadhyaya occupied a prominent place among such great souls. The RSS expects a Swayamsevak to inculcate all qualities, conserve them and work for the organizations, keep participating in the various RSS programmes in order of importance, carry out any other duties assigned to him in whichever field it be, Deendayal Upadhyaya was assigned to work in the political field. Some may have doubted his capabilities, but it can rightly be said that whatever position the Bharatiya Jan Sangh achieved was due to his dedicated efforts. There have been many vocal leaders in the Jan Sangh, many others worked very hard, but Upadhyaya was the one who laid the foundation stone of the party and worked for its attaining the dignity it achieved.

The person I have just mentioned had absolutely no political inclinations. He told me so many times during the last many years, ‘To what trouble have you put me? Let me return to my original work as a pracharak.’ I replied. ‘Bhai, who else is there to be put to such trouble but you? ‘One who is solely involved in organisational work can only jump into the cesspool of politics and clean it while remaining as untouched as a lotus amid all the muck. “

Atal Behari Vajyapee’s sentiments were expressed through the article, ‘We accept the challenge’, thus:

“Come, let us consider every drop of Panditji’s blood as the holy mark on our foreheads and move towards the ideals he lived and worked for. We should take every spark from his funeral pyre to our hearts and work to our utmost like him. We should turn the bones of this Dadhichi into stones and hurl them on the enemies so that our sacred soil is free of all roadblocks.

The attack on his life is an attack on our nationalism. The wounds on his body are assaults on our democracy. We accept this challenge of anti-nationals and enemies of democracy”.

The cause for which Panditji was born, lived and struggled, he sacrificed his life for that ideal. But his dream is still unfulfilled; his work is still incomplete.

Do read the below links :

1 thought on “Deendayal Upadhyaya – The Seer of Integral Humanism”