The self-proclaimed liberal mob as usual gets to thought-street fighting the moment anything Hindu is in question. Suddenly from their hate for Hindu orthodoxy, they prefer pretending more authentic about Hindu scriptures when it comes to practices that “Hindutva” rally for, trying to show how the Hindutva hooligans are not true Hindus. Now with the cow butchering and beef eating while they tried on the one hand to uphold freedom of enmasse butchering of cows, on the other hand they tried teaching that Hinduism is not inherently opposed to it (and example here) and that ‘original Hinduism’ that the Hindutva hooligans don’t have a grasp of but the liberal intellectuals have.

While the dishonesty and bullying of liberals is notorious enough and while countering the liberal position is a meaningless exercise (for, their arguments have no root only their motivations have root in their inherent anti-Hinduness) we should definitely understand how Hinduism sees this issue and what are the various aspects involved in understanding any such issue. For that we can use some of the absurd liberal arguments as contrasting positions rather than try countering them. This is not really a case against cow slaughter in the sense of pointing out problems in cow slaughter or merits in not slaughtering. Nor is this really a refutation of liberal arguments.

One of the usual arguments is that “originally” Hinduism did not see cow killing as a taboo and that cow-worship is of “recent” origin. This is not really just about a problem of fact but worldview. Of course, neither fact nor logic favor such view.

On fact – literature has two kinds of references, instructive and demonstrative. Instructions for a ritual tell us that certain practices were part of certain rituals. There are then allegories where there are citations for those practices really being in effect. So for instance if one quotes the procedure for aSvamedha as a proof of certain practice, one would do well to recollect how many aSvamedha rites are indeed possible, given that the whole of AryAvarta can only have one living performer of aSvamedha at any given point of time. Instructive examples from literature have very few mentions of cow killing. An overwhelming majority of paSu sacrifices do not involve cow as a paSu. Even a ritual like cow-sacrifice that one can show as example is quite remote and cannot be done as a regular or even as an occasional rite. For that matter Hindu thought is comprehensive and its various traditions have practices ranging from the most insufferable “sanctimony” to the “goriest” ones. On the one hand there is the monk who tries to avoid hurting insects, and on the other hand is the naramedhin who sacrifices human self. So to try telling what is “originally in Hinduism” to Hindus is to try showing candlelight to the sun.

Anecdotal evidence from literature has several examples like Surabhi, Sabala, Kapila that do not tell us the story of cow-killing but of cow worship. Rituals like cow-sacrifice come out as remotest, with not many examples to recall from the whole of veda-itihAsa literature. Examples like Vishwamitra taking calf come across rather as exceptions, both by volume and by where they belong – to the forest outside the village-town living. 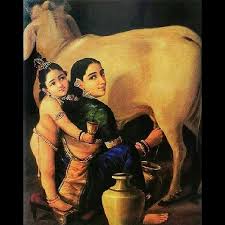 The bulk of literature sees cow as the nourisher, hence the mother. Protection of cow remains the theme of several allegories right from Indra-Panis of Veda (RV 10.108) to the episodes like gograhaNa of Mahabharata and where Arjuna saves brAhmaNas’ cattle from thieves (where he also breaches the no-entry norm by intruding the place of Yudhishthira & Draupadi). All these show cow as a rather precious wealth sought to be protected, not an edible to be preyed on and predated. The literature is full of instances of cow donations, praise of cattle stock as one of the greatest riches. Whether it is ghosha yAtra where dhArtarAshTra-s use the guise of surveying their cattle wealth in the forest or the go-grahaNa where the cattle grazed feely outside the town and had nominal protection from wild animals, it is clear that cow simply could not have been a slaughtered animal.

There are a lot of references to meat – vAtApi taking goat form etc. There is also the fact of evolving practices where paSu bali in many cases, over time, got replaced with a symbolic paSu to avoid killing of animals. A brief narration can be seen here and here. However most of these do not narrate cow killing or cow eating. Even instances of beef turn out to be minimal, not just cow. While the presence of meat eating and recommendations to avoid meat can be seen as half-full vs half-empty glass (there are both), beef examples are too few to indicate any norm or widespread practice.

Agrarian and pastoral societies heavily depend on cow and in India where divinity is attributed to nature and not just supra-natural, it is not surprising that cow is worshiped. It is only logical that the Hindus do not see cow as their food but as a food-giver. The instances of farmers searching for their lost cows, finding their cows getting killed by butcher-thieves in slaughter houses and committing suicide unable to see the horrific butchering, is something not just of fact that the liberals hide but a natural happening that would occur to any thinking mind.

This is also in line with the way Hindus and others look at nature herself. For Hindus nature is the mother( see “Nature as Teacher and the Trustee” under this), the giver of instruments of enjoyments including their own upAdhi-s and not the one to be enjoyed herself. Mother is the food-giver, not food herself. Mother is the giver of means of enjoyment, not the one to be enjoyed. For the abrahamists nature is not divine and nature is to be enjoyed and conquered. So it is only logical to see how differently they see cow from Hindus.

Civilizational commonsense thus suggests that Hindus naturally do not see cow as their food.

Those who suggest that Hinduism “originally had” beef-eating and that cow-worship is of “recent origin”, besides being factually wrong, fail to understand that Hindu sampradAya-s unlike book-cults are evolving and quoting some “ancient” text as if that is “original” only demonstrates the critic’s un-Hindu and Abrahamic thinking. Lived tradition is what is original, for Hindu traditions are experiential and not book-cults. So something being of recent origin does not make it any less Hindu. It in fact reinforces the fact that they evolve to suit the times unlike time-warped book-cults that exhort beliefs and practices that do not suit evolving human societies.

We also have wise men who say that man originally ate meat and he took to vegetable eating much later in evolution. While they tried to use it in support of meat eating, this is in fact a supporting argument for those against beef, for civilizational progress would mean you take to newer and more refined practices by leaving the older ones.

The beef lovers (for the sake of attacking Hinduness not really lovers of beef) first said that many Hindus do eat beef and that only a “few” sections of Hindus are against it. But it turns out that politicians, more aware of Hindu mood, though first tried this line of argument, are having to go back and not attribute such thing to Hindus.

There are multiple reasons for this. First of all it is not just the elite that keep and worship cows – the agrarian families are the ones that do it. The majority of this nation does so. Second, Muslims did not kill cows because they liked them but because Hindus hold them sacred, similar to the way they destroy temples not out of love for their own cult but because they have to offend the kafirs as a sacred duty. While this can go well with Hindu hating liberals, it cannot go well with any section of Hindus regardless of whether they themselves eat meat or even beef for that matter.

Having flunked in their attempt to divide Hindus on “practice” matter thus, some “intellectuals” now have to try digging out evidence to embarrass Hindus saying how their ancestors ate cows. But then, that falls flat for the above reasons. Both because our ancestors held cows holy and precious and because we are not book-cult followers to blindly do what our ancestors did and can do better with the knowledge they gave us.

One argument we hear is that these are matters of personal choice and we should not have legal sanctions such as prohibition of cow slaughter. But the same applies to many matters of personal choice such as monogamy into which laws make socially unwelcome intrusions. How much law should mandate how much should be left to social and personal self-regulation depends on multiple factors, considering two of them here as examples.

First, whether the present social circumstances need state to interfere or whether the prevalent situation is healthy and under manageable limits. On this, matters like cow slaughter need more legal intervention today than many other matters.

Second, whether a matter is happening because of or in spite of society. If something is a problem inherent in the society and the state is trying to enforce a noble change, such as overcoming oppression and discrimination, state has a case to make acts that bring society out of such practices. By norms of civilization, especially seen from the most civilized society’s worldview namely Hindu worldview, which at least by the claims of original constitution forms the basis for Indian state, state does have a case to make enforcements against cow slaughter. It is also the case that society at large is opposed to cow slaughter and that it is done by enemies of Hindu society both for provocation and to foster an anti-Hindu environment in the country. Even because of this the state has every reason to legislate against cow slaughter and enforce it.

1 thought on “Nothing beefy in beef arguments”