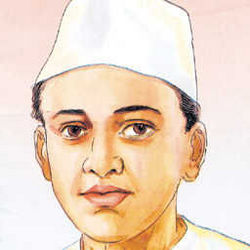 A Martyr for Swadeshi

Babu Genu Said was born in poor farmer family in Mahalunge Padwal , he was a worker in one of the cotton mills in Mumbai. He was an active participant in the protests, organized by Indian freedom fighters, against the import of foreign-made cloth.

On December 12, 1930, a cloth merchant named George Frazier of Manchester was moving loads of foreign-made cloth from his shop in old Hanuman galli in the fort region to Mumbai Port. He was given police protection per his request. The freedom fighters begged not to move the truck, but the police forced the protesters aside and managed to get the truck moving. Near Bhaangwadi on Kalbadevi Road, Babu Genu stood in front of the truck, shouting praises for Mahatma Gandhi.

Even as the police were physically preventing him and his colleagues from participating in this non-violent protest, Babu Genu never gave up his resolve to stop the trucks. The police officer ordered the driver to drive the truck over Babu Genu. The truck driver – Balbir Singh – an Indian came close to the protestors and stop. He said “I am Indian and he is also Indian, So, we both are the brothers of each other, then how can I murder my brother?”.Seeing this, the police once again intervened and physically removed the protestors from the road to enable the truck pass through.

After that, the English police officer sat on the driver seat and drove the truck over Babu Genu and crushed him to death under the truck. This resulted in a huge wave of anger, strikes, and protests throughout Mumbai. Immediately after Genu’s gruesome death, the Director of Information of British administration issued a press note describing the incident as an “accident”.

Message of his life :

Babu Genu was not formally educated. Yet he understood the symbiotic link between geo-politics and geo-economics. He understood that the geo-strategic interests of the British Rule in India. He knew that economics was the driving force of British rule; establishment of the British Raj was merely a ruse to perpetuate the economic dominance of the British over India. It is in this context Babu Genu understood the socio-economic-politic arguments propounded by Gandhiji and its significance. That meant that should the British rule were to be economically unsustainable it would collapse as there would be hardly any incentive for the British to continue their rule in India. He knew economic independence of India was interlinked, intertwined and integrated to the political independence – a fact that escapes the attention of our political and the debating class today.

He was fully aware that the no price could be less by any yardstick for the economic independence of the country. For there lay the key to political independence of the nation. No wonder he did not hesitate to make the supreme sacrifice of his life for the cause he so dearly believed.

Decades later as the nation is in search of the economic model that is suited for its development (and crucially what that development means) one may be tempted to dismiss Babu Genu’s economic thoughts as primordial, xenophobic or simply anachronistic.

Yet one cannot and should not dismiss the message contained in the life of these great men, who literally and physically in broad daylight, gave their life for upholding their beliefs. Why?

Firstly, that is so because the fact of the matter is that we the present generation live in independent India only because of the noble thoughts, selfless actions and supreme sacrifices of these great men. That is the least a nation may do to express its gratitude to such great men.

Secondly, and the far more important reason is that the context of the life and history of Babu Genu may seemingly differ significantly from what it is prevalent in India today. Yet, the text does not. Global powers clearly have a well-designed agenda – read global order – in imposing their will, thoughts, ideas and beliefs on others. If it was political domination through religion in the first millennia after Christ, it was done through the army in the second millennia. What is feared is that it could possibly be through economic intervention in the third.

Unfortunately, this brief history of mankind and a grim reminder of how the world looks at others and the manner in which it seeks to engage others – as one of that has to subjugate and ones that need to be subjugated. Surely, it is not how we look at the world or presume as to how the others look at the world – as one of near equals. As the ideas and ideals of the likes of Babu Genu fade from our collective memory, one is tempted to only quote the oft-repeated cliché: if you forget history you are condemned to repeat it. Obviously, to assume that global economic interests are completely independent of geo-political intentions or devoid of conspiratorial motives in these modern times would be childish to say the least.

2 thoughts on “Babu Genu and the Spirit of Swadeshi”